Krall does have a German ring to it

When I first listened to Diana Krall in February 2001 on a beautiful penthouse balcony in Mumbai, India, I knew I was captured by something special and – more importantly – music that felt more true and unpretentious than anything I have ever heard before. You can tell when an artist is in their element and simply does what they do for the fun, for the love of it, for sharing the pleasure with others. 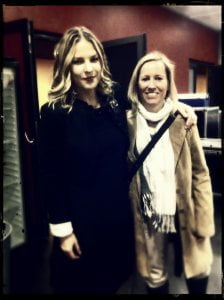 Diana once rightly pointed out that “you do not become a Jazz musician to make it big in the music industry”. Or meet presidents, work with Barbra Streisand and Paul McCartney or appropriately sprinkle beautiful stardust onto the funeral celebration of the first man on the moon with one of the most elegant musical performances any such event has ever seen.

For me personally the overwhelmingly profound identification with her music those eleven and a half years ago has also been the beginning of an almost life changing professional involvement with the people who make Jazz. Ever since my dear friend Jesse Bennett brought me closer than anyone ever before to feeling the magic of improvising when he was my alto sax teacher in my late teens, I knew Jazz was my world. Not just as a fascinated student, but as a listener, too. It was my re-awakened musical passion and curiosity, following Diana Krall’s lead as she kept recommending “further listening” from stage, mentioning other artists – current and past – like a reading list.

What followed can only be described as a wonderful dasy chain, the Jazz version of the “7 Degrees of Kevin Bacon”. It inspired me to go and see Geoffrey Keezer in concert (now one of my dearest friends) who had worked with Diana in the past, and who was touring with breathtaking vibes player Joe Locke – a dear friend of Geoffrey’s, who has fast become one of my closest and dearest friends. Joe introduced me to his friend Neil Percy, principal percussionist of the London Symphony Orchestra, and Head Of Percussion at the Royal Academy in London, and the friendship spread. Through Joe I also got to know Tommy Smith, saxophonist and director of the Scottish National Jazz Orchestra, who won the 2008 BBC Jazz Awards and – at the after show party – hooked me up with Level 42 pianist/vocalist Mike Lindup, who soon after joined the nadworks roster.

I could go on forever. Great people I have the pleasure of working with and meeting… and it somehow all began with Diana Krall.

In the summer of 2001, I felt the urge to spread the word about Diana’s music and unique vibe and started building a German language website. It grew and grew and so did its regular following. An artist of her calibre does not depend on digital fan output. But she always appreciated the loyalty and extra exposure. The good connection with her management in Vancouver, Macklam/Feldman Management, especially David Levinson and Darrell Gilmore, allowed me to meet her in person a few times. And while Diana Krall’s German website suffered from increasing neglect due to my ongoing work with Joe, Geoffrey, Tommy, Neil and Mike (to name just a few), I have recently decided to revive DKrall.de.

Her authentic music and passion for exploring new genres and eras will always have an intensely positive significance to me as the origin of the nodge I needed at the right time to discover a direction that has filled my life with great people and great work ever since and into the future.